ABOUT THE MOVEMENT FOR DEMOCRATIC CHANGE! (WITH SPECIAL REFERENCE TO THE ATROCITIES PERPETRATED BY ZANU-PF AND THE STATE MACHINERY AGAINST THEM!)

What exactly is the way forward in Zimbabwe?? Please Zimbos lets discuss! hosted by zimfinalpush.

Chat about what's on your mind. More about public chats.

NB: THIS IS NOT THE HOME PAGE! 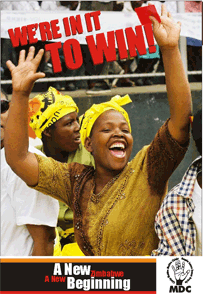 "A NEW ZIMBABWE, A NEW BEGINNING!"

The following comments are owned by whomever posted them. ZimDaily is not responsible for what they say. Please keep your comments short and sweet. Obscene, tribalistic, racist, vulgar comments will be deleted. Simple HTML is allowed for basic text editing.

I also do not believe that South Africans who reside in Zimbabwe are barred from expressing their opinion about the situation in the country. Equally, non-Zimbabweans are entitled to express their opinion about the situation in Zimbabwe. There are many non-Zimbabweans who have interests in the country and, therefore, are entitled to express their opinion about the situation. Zimbabwe is a member of the UN, AU and other bodies making it part of the global family. Once a country has accepted to be a member of the global family, it behooves on it to subject itself to international standards. Bush and Brown are not Zimbabwean and yet they have a view on what should happen in the country in as much as SADC has a view on Zimbabwe. In this respect, I do not see in what context, I should be excluded from expressing my opinion. I have substantial interests in the country and believe in the country's potential that is being wasted through misguided policies and programs. This conversation should go beyond the narrow confines of citizenship as the developments in Zimbabwe have consequences to non-citizens and citizens alike. Bad policies do not only affect Zimbabweans.

There is some misunderstanding on the tax issue. Any country has jurisdiction to tax its residents. It is common cause that Zimbabweans in the diaspora or who have emigrated are only taxed in the countries they reside in. Equally, foreign nationals are taxed in Zimbabwe as long as they are resident in the country. A foreign national who is not a resident of Zimbabwe is not subject to Zimbabwean taxes. Accordingly, it does not make sense for a person in my position to be subject to Zimbabwean law and taxes. This is an important issue because there appears to be a misunderstanding about taxes, citizenship and residency. The government of Zimbabweâ€™s propaganda has invested in making people believe that I am a fugitive. Under this construction, I am frequently asked when I will go back home. I do not know how often I have to repeat that I did not acquire South African citizenship because I was running away from anything. I have been a resident and citizens of South Africa for the last 12 years. While in South Africa, I chose to build a formidable asset base in Zimbabwe as a demonstration of my commitment to the country. My choice to live outside the country was a demonstration that you do not have to live in a country to believe in it. Like many Zimbabweans in the diaspora, they are free to make investments in Zimbabwe without having to be asked when they want to return. We are the first class of Zimbabwean born blacks who chose to invest in the country and be relevant as businesspersons and yet did not choose to live in the country. I had confidence and still do that Zimbabweans can rise up to the challenge and compete on a world scale. If I did not believe that Zimbabweans have the capacity to manage enterprises, then I would have relocated to the country to manage personally my enterprises. This I did not do and made a choice to let other people manage my enterprises. This is as it should be. Even if I die, my enterprises can have a life of their own.

The government of Zimbabwe decided through expropriation decrees to alienate me from my Zimbabwean companies. While this is unacceptable, what is encouraging is that my enterprises are still running even though the control has been divested from me using unconstitutional laws. To the extent that the enterprises can continue to function without me it confirms my belief that it is possible to make an impact without being personally at the coal face. I have done my bit in 10 years to demonstrate even to President Mugabe that hard work can produce results. President Mugabe has been at the helm for 27 years and yet has failed to produce any positive outcome for the country. My assets were attractive enough for the government to want them and I am not sure whether the finances of Zimbabwe are in a shape that will make them attractive for any successor to Mugabe.

The alleged exchange control violations require some explanation. Any exchange control regulations apply to residents. Zimbabwean companies are the ones that are subject to Zimbabwean laws. If they export, they should be accountable to the Zimbabwean authorities in their own right. Chaos will prevail if owners of Zimbabwean companies wherever they are situated become subject to Zimbabwean laws. Penalties can be imposed on the companies in question if they violate any laws. To date none of my companies have been subjected to any penalties in respect of the alleged exchange control violations. I am not sure in what context Gono would want to talk to me. He can talk to the Zimbabwean companies if there is anything that he wants. Only in Zimbabwe does the foreign currency of exporters belong to the Governor. I can only quote the words of the Governor of the Bank of England who recently said: A successful monetary policy should be boring, and, successful central bankers should be seen as neither heroes nor villains. Imagine if UK exporters had to talk to the Governor in respect of export proceeds, what chaos would obtain. One would expect the Governor of the Central Bank to provide leadership on monetary issues rather than become a policeman.

If you want evidence of a failed state, you will not need to look further than at a Governor would thinks that he owns the sweat of exporters. Exporters are sovereign people and all they need is an environment that is conducive. There are many Zimbabweans who naively think that the role of a government is to be a referee and player at the same time. You have heard many Zimbabwean leaders express the view that any output from a productive process belongs to the nation and, therefore, the state can dictate how much should be produced and the cost thereof. I have yet to see a progressive nation in which the state thinks for citizens and instills fear in them as a national salvation strategy. The experience of the former Soviet Union and related countries has shown that an ideology premised on fear and intimidation is not sustainable.

In response to the question of when I will return to Zimbabwe, I can only say that I will visit Zimbabwe when sanity prevails. I was one of the first victims of the senseless policies to nationalize private companies as a mechanism of maximizing national wealth. To access my rights without due process, the government had no choice but to target me personally because I was the holder of the property rights they sought to expropriate. To give the exercise some sense of legitimacy, a scenario had to be created to demonize me on allegations of externalization fully aware that I was already a foreign resident. My former friends were recruited in this project i.e. lawyers and accountants that were beneficiaries of my initiatives. Today such professionals (and not Mugabe) has sold their souls to the devil for commercial expediency and would like the unsuspecting public to believe that I am a fugitive.

My characterization as a fugitive is no different from the attempted characterization of the Zimbabwean crisis as a consequence of sanctions. Many have bought the story in as much as intelligent Zimbabweans have accepted that the Zimbabwean government was justified in nationalizing my assets. If a lie is told many times it acquires its own momentum of legitimacy and my case is one such tragic story. Here you have a Zimbabwean born national residing outside the country being accused of externalization and yet the assets seized by the government are situated in Zimbabwe and not offshore. If I was guilty of the offence, the government would not have had anything to nationalize. By now we would have heard of the consequences of the alleged externalization in terms of asset stripping. In any revolution, it is important that the truth be the custodian of change and if revolutionaries become the instruments of confusion then only God can help Zimbabwe. My case is in the courts and there can be no excuse for people to speculate about the facts and the legal issues. I can only urge people to take the time to study what is already available in the public domain.

Mugabe has successfully made the argument that he is entitled to victimize any white investor in the interests of justice. This position is shared by many of his colleagues in Africa. However, I am not sure that many people are fully informed of our cases where blacks have also been victimized and unfortunately we do not have an Anglo Saxon heritage to attract the outrage of Washington DC and London. Even our own people believe that Mugabe is justified to use the state to victimize private individuals. If such individuals are in some way contaminated with ZANU-PF, then their rights are supposed to perish. It appears that there is now a new sense of justice that says the state can undermine the rights enshrined in the constitution without any accountability.

Yahoo! Answers - Get better answers from someone who knows. Try it now.
Posted by ZIMCITIZEN! at 7:04 AM

The development taking place in Zambia has nothing to do with Zimbabwe's misfortune. why do you wish the zambians ill? The revitalised mining industry in zambia is not related anyway to your politics. As for the White farmers who opted to settle in Zambia; my understanding is that you did not want them in your country. Oh yes we may be poor as per your stands however relatively we have always lived in peace...And may it continue. We dont admired South Africa's or Zimbabwe's wealth.